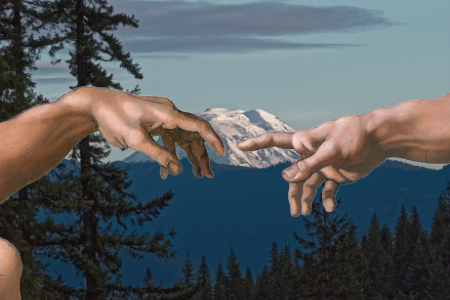 It’s no secret that 2020 has been a wild year so far: plague, murder hornets, the US government admitting UFOs are real and an evil stepmother keeping Michigan locked down out of spite. Suffice to say, it’s unclear what 2020 will bring next. Perhaps it’ll be clear in hindsight.

…I’ll see myself out.

Date puns aside, COVID-19 and its ongoing after-effects have dragged us into a siege mentality. As pointed out by WesternMan in his article on localism there is an ever-increasing need to bring things closer to home and to reduce the strain on resources pulling from further and further abroad. It is a time to build and maintain, for it is only by building, as emphasized by Marc Andressen our entire culture has been centered on a false sense of progress that the things we need here are available in insufficient quantities. We failed to prepare. And we have failed to be good stewards.

Stewardship, as defined by DiscoverHorizons, a Christian Stewardship-Inspired organization, is our “responsibility to manage wisely the goods and property that are in our possession…income, environment, property, goods, time, talents, and our very selves.” We are stewards over God’s creation, for heaven and earth belong to Him, not us (Deut. 10:14, D-R). He gave us dominion over Creation to “dress it, to keep it” (Gen. 2:15); it is “not an absolute power, nor can one speak of a freedom to ‘use and misuse,’ or dispose of things as one pleases (St. John Paull II, On Social Concerns, no. 34). Lordship means fidelity and responsibility in return for the fruits of Creation. Nature gives to us, so we tend to it in kind. Like Man, the land must rest and be kept from being abused and wasted (Lev. 25:1-7, D-R). We must rethink how we plant, grow, and feed ourselves and look away from larger farms and back toward families and individuals.

Does this mean we as a nation abandon the mantle of responsibility thrust upon us to feed and clothe the world? Absolutely not, nor does this mean we need to subject ourselves to the confessing of “eco-sins.” It means we must do better and make more efficient use of what we have, maintain the fringes of our fields and “leave them for the poor and the stranger” (Lev. 23:22); taking everything down to the ground isn’t how things are meant to be. We must do these things for the “environment is God’s gift to everyone, and in our use of it we have a  responsibility towards the poor, towards future generations and towards humanity as a whole” (Pope Emeritus Benedict XVI, Charity in Truth, nos. 48, 51). On the surface, this endeavor seems impossible to embark upon, though there are many small, incremental ways in which one may be a steward, the smallest of which is the garden.

What makes the garden so alluring to many, especially those who’ve now found themselves stuck at home is this: it is a symbol of wild, untamed Nature cultivated and controlled by the hands of Man. A garden is an injection of chaos into order and an injection of order that creates a balance within and without. As Jonathan Pageau demonstrates, Eden itself is structured and has a hierarchy. Like Eden, a garden is a way in which we emulate God the Creator and emulate our first home. It is the reason suburban dads beam with pride at the quality, color, and level of their lawns, donning stained New Balances every weekend (I’m a dad, I can say this) to trim and dress their Eden. It is this small joy that has prompted men and women stuck in the cities to do the same on patios and balconies with something as small as a single cactus to jungles in miniature.

It is a thing we are compelled to because we are meant to be stewards.

As stated above, it can be as simple as building and planting your own raised garden for vegetables (peppers and tomatoes are in-season and potatoes grow in the shade). Or, if you have the room, plant in your own soil. It may seem small, but it allows us to reduce the logistical strain on larger farms, reduces fuel costs from lowered shipping and reduces water waste (more on that in a bit). And honestly, it’s fun: where else does one get to play in the dirt as an adult without Mom yelling at you? Another way to take better care of the area around us is by installing rain gardens. With rain gardens, one introduces a more natural way of filtering out pollutants in run-off water such as pesticides, fertilizer, etc. They also act as shelters for various native species of plants, animals, and insects such as dragonflies and bees, helping reverse some of the reduction in species from habitat loss and the mystery of the disappearing bee. As someone who lives in a flood area (Houston) rain gardens are also a great way to ease the strain on municipal drain systems and reduce the strain on water treatment plants.

If one is unwilling, unable, or simply wants to take things even further than home gardens, several organizations exist that one could donate their time or money to. Urban farms, like Plant It Forward, have taken it upon themselves to help feed homeless, immigrants, and those on the fringe and are more than happy to accept your donations or your time. Other, larger organizations include Coastal Conservation Association here in Texas or Ducks Unlimited; donations to these groups are cheap, easy and contribute to the goal of conservation and preservation in some small way.

Now, does this mean we the faithful must now turn our time, toil, and treasure toward fully recovering the Earth, submitting donations like so many indulgences? Not at all. To do that is a form of idolatry and replaces God with Gaia. Does that then mean we also have free reign to use and abuse Creation like some kind of plaything? To do so would show what little care one truly has for him or herself since we too are a part of that Creation. As with many things, all in moderation. Yes, there is much in the way of pollution, toxins and waste in much of the world, however much less so here; the US has made great strides in correcting these things both at the personal level and at the governmental level (“Don’t Mess With Texas” comes to mind).  Unfortunately, said waste is a sign of an ever-increasingly consumption-based culture that refuses to take acknowledge the damage done in return. [MA1] [DVV2] It is also an increasingly pagan West focused more on mammon than virtue that has driven the work abroad in return for a cheap buck. It is the outward sign of stewardship abandoned.

To be a steward is to maintain. To be a steward is to revive and help an estate thrive. To be a steward is to keep hearth and home safe against the wilds. We as Christians and as Catholics specifically, must remember this. If not for reward or grace, then as a duty. Stewardship is the oldest duty and responsibility bestowed upon us. To ignore this and let the hearth go cold, the home collapse and the fields to rot is to abandon duty to God and country. It is time to retake the mantle and title of a steward.

Written by David Van Vranken. David works as a QA/QC Inspector for Vaughn Construction out of Houston, Texas. He also serves as a Company Commander in the Army Reserves. David has previously published at Entropy Mag and Every Day Fiction. Enjoy the article and want to buy David a coffee? Click here. ☕

I really enjoyed reading this piece and it makes a great deal of sense in the world we live in! I look forward to reading more work by David Van Vranken.