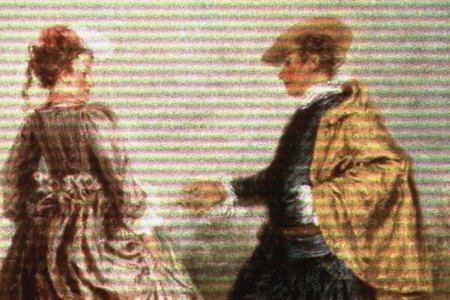 It is a bittersweet irony that this year’s SXSW film festival was canceled just as one of the featured documentaries, the acclaimed TFW No GF was slated to present many film companies for distribution.  The irony is that the subject of the documentary is the most “canceled” group of people in our current “cancel culture”, the young white male.  In her directorial debut, Alex Lee Moyer (@sweet_T_QT), an editor with a background in music videos, took on the project in 2017 at a time of her own uncertainty.  Alex follows four “incels”, internet jargon used to describe the “involuntary celibate”, framed by burgeoning internet celebrity Kantbot who is older, wiser, and more charismatic than his incel colleagues.  The real star of the show is Wojak, the internet meme of the 2010s which encapsulates the archetype of the anonymous and impoverished NEET living in his parent’s basement.

The film compares favorably to Direct Cinema documentaries such as those produced by the Maysles.  I am reminded specifically of the Salesman (1969), a classic in this genre. Albert Maysles once said that “Remember, as a documentarian you are an observer, an author but not a director, a discoverer and not a controller.” In Salesman, the Maysles followed four bible salesmen on their rounds.  Unlike the incels in TFW No GF, the Salesmen were professionals and clean-cut, but the Maysles certainly focused on the most dour and downtrodden failure, the hapless Paul Brennan.  There was even some controversy as to whether the Maysles had hired Brennan as an actor.  In a bittersweet twist of fate, TFW No GF is currently distributed on Amazon Prime.  Before bankrupting much of the retail industry, Amazon wiped out the last of the door-to-door salesmen.  How ironic that they are packaging the misery they largely created and selling it back to us.

By comparison, in TFW No GF, Alex captures the authenticity and fragility in her subjects in a way rarely seen on film.  TFW no GF is not merely that the young men do not have a girlfriend, it is shorthand for the alienation of men in their early 20s from their parent’s from each other, and from society at large.  The only community they have are image boards such as 4chan and social media outlets such as Twitter. The first young man is Sean (“Sean guy”) and his scene opens with a shot of his chin-up bar.  Sean is an attractive young man that lives with his mother and is a high school dropout.  His tweets portray a tender melancholy, but he definitely has an angry side.  John Maus and Ariel Pink provide a soundtrack that is evocative and haunting and really bring an emotional undercurrent to Sean’s words.  Of the five men profiled Sean may have the most poetic nature, as demonstrated in this tweet:

“To see a World in a Grain of Sand

And a Heaven in a Wild Flower

Hold Infinity in the palm of your hand

And Eternity in an hour.”

Alex then follows two brothers, Viddy (@viddymalchick) and Charels (@rels) of Tacoma, Washington and we wallow further into this morass of alienation. Charels and Viddy tweet on separate phones during the introduction.  The brothers were exposed at an early age to 4chan and are the most provocative of the group. They have a nice gun collection.

“I’m not a misogynist I just hate women” was a popular tweet, which promptly had gotten Charels’ account locked.  Viddy and Charels follow Kyle (@covid19fatality) from El Paso and we meet a giant shitkicker with what may literally be a 10-gallon hat. Kyle may be the least articulate of the group but provides some of the most emotional depth in the film.

Alex attempts to show some incremental growth as time passes for the incels, but it amounts to a little more muscle mass.  Sean is working two jobs while his Mother has cancer. Kyle gets a nice kino close up while lighting a cigarette, and Charels supposedly “gets a gf”. In a near-tragic turn, Charels has his guns confiscated under red flag laws for tweeting a picture of himself holding a gun with the caption “Two tickets to Joker, please.”

In the fall of 2019 the Joker Movie, which had received heavy marketing support from Warner Brothers, was highly lauded amongst anonymous young twitter posters, even among those that typically do not watch superhero movies.  Hollywood had seemed to rather successfully co-opt and commodify much of the fear of the anger of young men, and particularly young white men, that many of these young men particularly appreciated it.  However, there were exceptions, I will speak at two from at first glance quite different perspectives.  The first was from noted Catholic scholar and author E Michael Jones, and the second from anonymous twitter persona and Nietzschean Bronze Age Pervert.  In BAPs opinion, the weak-minded and whiny Joker would not have the cunning and forethought to cause such calamity to be a threat to law enforcement and cited the ineffective Janissary riots.

So where does that leave the incels?

In his popular podcast Caribbean Rhythms, BAP outlines an alternate plot of a movie where a soldier returns from the Persian Gulf and finds people in his hometown dying of fentanyl, in other words the frustration of a young highly trained and focused man in our modern world.  BAP is a good friend, and he paints colorful pictures of right-wing bodybuilder enclaves, and I agree largely with his approach to inveigh the loyalty and friendship between men to rule the world as groups of pirates.  BAP idealizes a type of epicurean lifestyle of camaraderie and adventure seen in men like Mike Hoar that served as mercenaries within warring factions of African countries. But the young men featured here, having not finished college or perhaps even high school, do not have the option of joining the military (which would train them for adventure), and entry-level sales jobs are gone or also require college.  So where does that leave our young men?  Floundering around on food stamps or flipping burgers. But historically there was a place where men with few career prospects or landed property go, it was called the Catholic church, particularly in monasteries.

In comparison to BAP’s vitalist exhortation, Kantbot is incredulous at the end of TFW NO GF, asking if wants Ms. Moyer to explain what the point of life is.  Despite his initial protests, Kantbot relays the close of Goethe’s Faust. Walking through central park Kantbot evokes Woody Allen in Manhattan, but intelligent. Illustrating that it is not the lack of a GF per se, but all the challenges that Faust undertakes, ultimately in the raising of Atlantis, in order to break the curse of Mephistopheles. Earlier in the film, Kantbot talks about Friedrich Schlegel, who wrote mainly aphorism, and how that even though each fragment or aphorism was short he still influenced literary theory. But consider, Jesus spoke in parables comprised of a few paragraphs each, and these were considered simplistic by the Greeks of that period.  Yet it was the power of these parables that held together a Christian culture within, but not of, the Roman Empire.  The brevity of distilled wisdom facilitates the repetition, and thus its durability.

It is clear that the one thing missing from these men’s lives is not “GF” but rather LOGOS. Logos is a Greek term that means “reason” and furthers the “divine reason implicit in the cosmos”.  The closest translation in English may be “Providence”.  Ms. Moyer illustrated how much chaos rules the incel’s lives, that the nihilism of internet forums and post-industrial America holds little hope for them. What Catholics like E Michael Jones pointed out about last years’ Joker, and applies here, is that the one thing missing. As a flâneur who has seen these types of experiences firsthand, I want to say that these men need to know that God is the author of history and that God has a plan for them.  Further, I would suggest that they attend a Catholic Mass with traditional liturgy.  It would make great content.

I would like to tell an anecdote that highlights another possible avenue for young men.  I was going to a Catholic Church with a very modernist approach, Life teen Masses, references to Star Wars, an electric bassist, and a drummer for Mass.  At the suggestion of an anon frog, I decided to attend a church that provided Tridentine Latin Mass.  I went to a meet and greet and one of the presenters was a man not much older than the subjects of the documentary.  He was painfully shy; he did not even want to make eye contact with Faisal. I later met his parents during a church event and noticed that despite their impeccable dress and manners they had a 20-year-old Chevy Astro.  But this young man with modest means and talent not only had a GF, but he also had a waifu (wife) and a child.  The husband and wife had been singing in the church choir for years prior to their engagement.  Mass for them was not a chore, it provided a sense of community and gives their lives meaning.  Raising a family, becoming a plumber or welder, working with your hands, and being an upstanding member of a community is a calling far more valuable than shitposting WITHOUT PAY on the internet.

TLDR: I highly recommend TFW No GF as a meditation on the chaos and alienation of young men today.

Faisal Marzipan (the Lebanotarian) is a serial entrepreneur in the biotech field and the founder and director of the Clairmont Integralist Institute, a na’an profit prestigious think tank of great influence & clout with the goal of renewing the third Punic War with CRISPR-generated, armor-plated megafauna. In his spare time, he writes position papers and intellectual book reviews. His hobbies are roasting eggplant and providing grocery deliveries. All inquiries can be directed to his Twitter @CypressRevival.