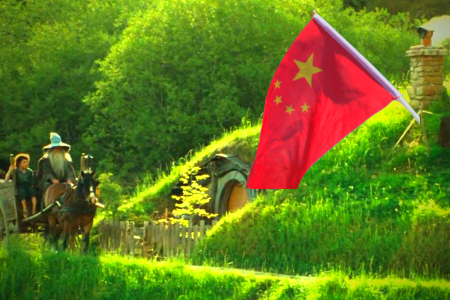 One cannot help but be inspired by the almost utopian scenes of the Shire in Lord of the Rings. The idea of a small, close-knit community with the spirit of self-reliance enchants every man and woman that yearns for fellowship and prosperity amongst their neighbors. The Hobbits of the Shire implemented the idea of Localism, and yes, to be fair, the Middle Earth universe is different from ours, but one cannot assume the Hobbits were much too concerned about the Shire’s GDP and or outsourcing essential supplies crucial to their way of life to Mordor. So, enough of the idea of the Shire outsourcing the domestic jobs of their Hobbit-kin to the Orks, in our universe, we have undoubtedly been irked by what our real Mordors have been up too, and it has impacted nearly every ordinary American.

Many things have happened this year, but nothing has disrupted the economic and political goals of our Globalist elites more than the Wuhan Coronavirus, (otherwise known as COVID-19). Perhaps more than just the danger of the actual virus, the hysteria and panic of the crowd has instilled doubt of our current globalist economic policies amongst even the “normies” of the mainstream American political consciousness.

The American supply chain has been disrupted and shocked by the panic buying of the frenzied consumer. Furthermore, as of Mid-March, more than 75% of all American companies have had their supply chains put under immense pressure. The Wuhan Coronavirus has hampered the flow of supply around the globe and, most importantly, the United States. All of this has forced many American companies to resource products domestically and has shown that we truly need more resilient supply chains. While the Harvard Business Review is calling for an increase in venture capital investment for supplier-monitoring systems and technologies, we believe that necessary goods for a healthy community can only be created through resilient local cultures and economies through Localism.

Localism in the Catholic Worldview that comes from the ancient social justice principle called Subsidiarity, which dictates that decisions are always best handled as close as possible to the people who are most directly affected. The idea of empowering local governments and even neighborhoods to an extent. The economic impacts are also many such as bringing back critical high-paying manufacturing to local and regional economies, lowering environmental impact in logistics and shipping, increased transparency, and often shorter supply chains. Consumers increasingly prefer local goods, produced in their home countries or regions by their people, using local components or ingredients. One would even think that investing in localism would be a great way for companies to hedge for the future. This investment in the local supply chains could bring the cost of logistics and shipping down, use the local workforce, and reap the marketing/branding effects of being locally-sourced. This could be a significant economic opportunity if only smart money could see the exponential growth in “onshoring“. Of course, due to geographical challenges, this is not as ideal on paper as a Communist planned economy or any other pipe dream, but it is possible because it has been done before on a wide-scale in Christian civilization.

This principle has its foundations in the way that God himself exercises power. God has a high regard for human freedom. Just think of the story of Creation. God did not force Adam and Eve to avoid the Tree of Knowledge. He gave them the freedom to do as they wish. Of course, this is not an argument for economic or cultural Libertarianism either, as this principle is often used as a talking point to argue against the current secular bureaucratic swamp. Subsidiarity can only work insofar that it is integrated within a Christian moral framework.

In the United States, our founders prized the concept of “federalism,” insisting that stable state and local governments were vital to preserving unity in a large and diverse republic. Even though the United States is practically a completely different country than it was in the 18th century when the founders walked on Earth, the principle is still the same. Having the economic Autarky to put its citizens and future in the best position possible in case of a crisis and during peacetime is crucial. The United States may be extremely diverse in worldviews, perhaps too diverse by now, but we must still take the heed of St Thomas Aquinas’s words and use the influence of power we hold, no matter how small to direct our country to greatness again.

“Man is a debtor chiefly to his parents and his country, after God. Wherefore just as it belongs to religion to give worship to God, so it belongs to piety, in the second place, to show reverence to one’s parents and one’s country.”

Our country needs a new economic agenda that is radically pro-American worker, pro-Family, and pro-Local. We are not advocating for isolationism, but we live in a time where the GDP is a sacred determining number for oligarchs, and the stock market matters more than just wages for the average American worker that is already a prey for the usurious Globalist woke corporations. We have a system that is not working for the common and moral good of our country and our families. Much of the problem is indeed a consumerist cultural one, but still, we have our supply chains spread out so thin that we are at the mercy of random (or planned) pandemics, natural disasters, war, or political quarrels amongst nations. Nevertheless, finely tuned P&L sheets and quarterly profits matter very little in these scenarios when it can all wipe away months of gains or trillions of dollars in market value in a matter of days. Instead of ripping a strategy paper from 2008 and artificially propping up our economy, we must instead plant the seeds to control and mitigate disaster in our future.

The shift towards a more localism-based supply chain would guarantee a modicum of stability in case of these crises. Of course, this does not align with globalist interests and, in many ways, will one day be described by Huffington Post or CNN as the preferred populist or neo-nationalist economic choice. Controlled mainstream media like NBC are already posting headlines blaming the inadequate economic response to the virus on nationalism instead of Globalism to control the massive redpilling that is currently happening of the dangers of a globalized economy. The rulers of this world and their idea of the New World Order have Globalism as the preferred economic policy and its implementation will be needed to achieve their utopian “Heaven on Earth” ideal. The current wind of economic populism must be protected from these future blows and outside subversion as well. Current populist figures like Tucker Carlson exemplify these sentiments, and with the current pandemonium surrounding the Wuhan Coronavirus, these sentiments are going to permeate the public consciousness even more during this election year. We hope the words of Pat Buchanan ring true in 20 years.

“It may one day be said that the coronavirus delivered the deathblow to the New World Order, to a half-century of globalization and to the era of inter-dependence of the world’s great nations.”

These ideas may be dismissed as wishful thinking right now, idealistic even, but to make them a possibility, it will take a complete retooling and overhaul of the current policies we have been pursuing thus far. It will take a sound industrial policy to bring back jobs domestically and a moral policy that will put the traditional family at the center again. Perhaps we can start industry by industry that is best suited to our resources and talent pool. As was said before, this will have adverse effects on short term corporate profits, but the global economy as it currently exists is still more reliant on a stable American economy than the other way around, and we may not always have that opportunity with the current risks and policies. We have two choices ahead of us as more of the roaring twenties pave history. We can continue to go down the road of inter-dependence with hostile and culturally opposite nations at the mercy of uncontrollable pressures, or we can form the resilient cultures and economies needed to help our nation stand firm as the economies around us crumble and become destroyed due to Globalism. What will our legacy be in history as the changing of guards happen from the current generation to ours?

Western Man is the founder of MiddleEarth Magazine. He is a Catholic Reactionary, Integralist, and a prospecting Monarchist. You can follow him on Twitter.