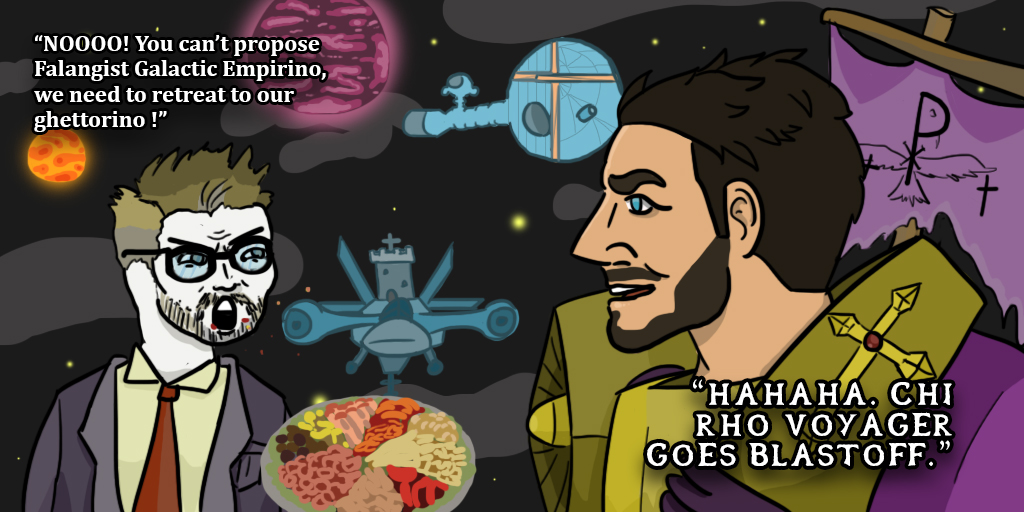 Reading the Benedict Option by Rod Dreher, I was reminded of a story I heard about sales training. Anyone who knows sales knows that when conducting a field run to train a novice, the first rule is that the novice doesn’t speak. Allow me to set the stage here.

An experienced salesman knows he has to gain the trust, find a need in the prospect, demonstrate his product to fill the need, and then CLOSE the prospect on the purchase. This sets up tension between the salesman and the prospect, to which the prospect will provide objections.

Sometimes there is only silence. Silence is good. When you provide a closing question like, “would you like one today or order it on a payment plan?” And stay mute you put the ball in the prospects’ court. A trainee will find this uncomfortable and on occasion chime in.

This deflates all tension but allows the prospect off the hook of making a decision. Anyone can convince someone else of the utility of a product, but persuasion requires action and investment.

But back to Benedict Option. I am of two minds to Dreher’s thesis. He has a lot of practical advice, enough so I’m willing to half-heartedly encourage those to buy and read it, but find by his lack of willingness to CLOSE he gets in his own way. For example, on page 87 he states “Because Christians need all the friends we can get, form partnerships across denominations and different religions. And extend a hand of friendship to gays and lesbians who disagree with us but will stand up for our 1st amendment right TO BE WRONG.”

I want to emphasize that last part. Dreher does not want to make normal people uncomfortable with dealing with LGBT community. Like a sales trainee he wants to deflate the tension. As a result, he has a book of good advice that attempts to convince the audience of what is right without persuading them to act accordingly.

Looking Toward Eternity, Instead of Antiquity.

The Benedict Option was an effective way for Christendom to survive the excesses of the final stages of the Roman empire. But, consider at the time the birth rates and world population. The world population in 1300 AD was between 300 to 400 million, in the ballpark of the entire USA population today (on the low end). The average life expectancy was 31 years and the European population grew at a rate of 10% each CENTURY in the medieval ages. Take England for example. In 450 years the population of England and Wales doubled from 1.6 million to 3.3 million. Thanks largely to the Western support and agricultural innovation, the population of Africa doubled between 1982 to 2009 from 500 million to 1 billion. In 1950 the population of Africa was 250 million, and it is set to reach as high as 4 billion by 2100 according to some UN population estimates. Although most of the rest of the world has retreated to replacement levels of fertility rates or below, some African countries have fertility rates as high as 6 or 7 children per woman.

While well meaning, any attempt at regaining a foothold on Western Civilization must use the full force of not only religious teachings and institutions, but also bootstrap the massive technological advances the first world has to offer. We cannot eschew technological progress in our attempt to craft an ideal society.

Dreher examines the role of technology in Chapter 10, Man and the Machine, and discusses the role of in vitro fertilization. On page 222 he talks numbers:

“British government statistics made public in 2012 revealed that 3.5 milion embryos were created in UK laboratories since 1991, when record-keeping began. Ninety-three percent never resulted in a pregnancy, and about half were thrown away without even trying. The US has no reliable records for the sake of comparison (emphasis mine, I mean really!?)but with a population five times larger than Britain’s, a parallel number would mean 17.5 million unborn human beings were brought into existence in a laboratory, with 16.2 million dying and 8.8 million thrown into the trash can without an attempt at implantation.”

That paragraph stuck with me. Dreher again identifies an important problem but his approach is backward-looking. Two paragraphs later he states.

“Many conservative Christians strongly oppose abortion and back laws restricting it. There is no movement to ban or restrict IVF, even though from the life-begins-at-conception point of view, it exterminates millions of unborn lives.”

This is crying over spilled milk and exactly the kind of defensive posture that has allowed the right wing, in the marketplace of ideas and politics, to get rolled repeatedly. Where Dreher sees only tragedy I see an opportunity with enormous potential and upside for Christendom. All it takes is a reassignment of priorities and a few policy tweaks.

What I am proposing, dear reader, is a market-driven and Christian approach to citizenship. I call it the Miracle Angel Option. Current citizens choosing future citizens based on genetic characteristics determined from their parents. There are between 400,000 to one million embryos currently in frozen storage in the United States alone, and an embryo frozen for 24 years was recently born healthy. The race of women performing IVF is overwhelmingly white, at 91%. Meaning that about 900,000 white embryos are waiting to be entered into this world (and 40k blacks, 30k Hispanics, and 30k Asians). I am not proposing that we approach Nigerian levels of breeding but in order to maintain replacement levels of the population we need to increase births by about 10% or 200k annually. Fortunately, we have 2–5 years’ worth of Miracle Angels in storage.

In addition to this, each embryo created and selected for families requires the production of up to eight additional embryos. Since 2007, about 61,000 babies were born due to IVF; meaning each year there is a potential bank of ~ 1/2 million embryos to draw from. As of now many of those are destroyed, but if we provide incentives to the parents it is likely we can retain at least 3/4 of those.

Think of it like a signing bonus. For well-educated healthy parents you can provide $1000 to waive parental rights. Now, we can provide an auction for parents meeting certain benchmarks that they meet (2 incomes, no criminal record, also well-educated, already raised a couple children). At first it may seem like jury duty, as potential adoptive parents would be assigned this task, but with the help of the US government and local churches this will actually be quite painless.

First of all, you can be assigned by lottery draft the order in which you pick so the first set of parents can pick the offspring of a Nobel Prize winner and a concert Pianist, or if you choose you can have the genetics of a Tight End and Miss Ohio. It would be basically drawing a lotto ticket with 5 of the 6 winning numbers.

Adopting parents might be interested to know that daycare vouchers would be provided for use at either secular or Church-related. Pro-life Churches would be proud to take part in reclaiming souls from limbo and block grants could be distributed to states.

I know, gentle reader, that you may balk; where will we get this money you may ask. Well, the cost of raising children will be offset by all the welfare we would not have to spend on immigrant families. Over 50% of immigrant families are on some form of welfare, and some ethnicities even close to 70%.

The United States citizenry has been compassionate to immigrants to the point of financial insolvency, and if the choice is between adopting a designer baby or redistributing my tax dollars to any Somali, Romanian, or Sri Lankan that overstayed a visa or was an indentured servant to a Silicon Valley oligarch, well, give me the baby. Who needs more compassion than an embryo?

In conclusion, the Miracle Angel Option would be a proactive, Christian, and libertarian approach to retaining replacement level demographics in the US. When considering the amount of foreign aid, refugee settlements, and immigrant welfare Americans have paid since 1965 to raise third world fertility rates abroad and grow new colonies displacing US citizens here, the least we could do is empower Americans to determine the fate of their future.

(Author’s postscript: allow me to note that, in line with Catholic teaching, I am against in vitro fertilization as it is against natural law. But it is to be considered as a thought experiment in accordance with an optimistic approach to society mired in degeneracy.  Since the publication of The Benedict Option, the appointment of Christian, pro-life judges have gained considerably and the views toward degeneracy and the LGBT agenda have largely soured worldwide.  I await the arrival of more proscriptive and optimistic approaches to modern degeneracy and even have a few suggested titles, such as the “Miraculous Option”, the “Reconquista Option” or my favorite, “The Catholic Galactic Empire Option”.)

Faisal Marzipan (the Lebanotarian) is a serial entrepreneur in the biotech field and the founder and director of the Clairmont Integralist Institute, a na’an profit prestigious think tank of great influence & clout with the goal of renewing the third Punic War with CRISPR-generated, armor-plated megafauna. In his spare time, he writes position papers and intellectual book reviews. His hobbies are roasting eggplant and providing grocery deliveries. All inquiries can be directed to his Twitter @CypressRevival.