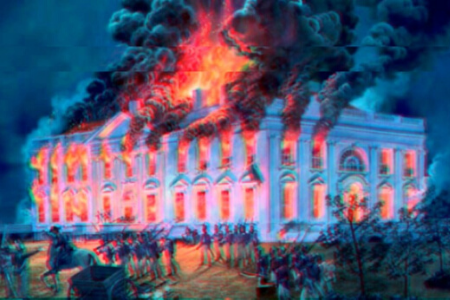 Why are we celebrating Canada’s 150th birthday on July 1st, and not the 241st birthday on July 4th? Why did Canada not join America’s rebellion against Great Britain? (Being a good Loyalist, I will use the contemporary British name for what others call the American Revolution.) This is a question that seems to attract essentially no inquiry on the Canadian side, despite the fact that Canada as a sovereign state only exists because of the answer to this question. Americans will occasionally tackle it, but it is usually framed as a military question: “Why were we not able to ‘liberate’ Canada when we liberated ourselves?” However, even this question has faded into the distance in the last 100 years, since Justin Smith published Our Struggle for the Fourteenth Colony, and essentially answered the American side.

Before revealing the true answer, it is important to dispel an easy answer that is absolutely false. This is the idea that America simply did not care about Canada, since it was cold and full of Frenchmen. In fact, the Continental Congress sent three letters, four delegates, and an invading army into Canada to convince them to join the Continental Congress and by extension the Rebellion. They also put an open invitation to Canada (and to no other colony) in the Articles of Confederation, and Benjamin Franklin’s opening offer for peace with Britain in the Paris negotiations was that Britain give Canada to America.

Clearly America cared, and cared deeply, about securing Canada to their cause. There are many, many reasons for this desire. It doesn’t really matter for our purposes why they wanted Canada. (If you’re curious, read the first five chapters of Smith’s book. It’s available for free.) What we want to know is, why did Canada say no? Though there are nearly as many reasons for this rejection as there was for America’s desire for Canada, two of the most important factors were Governor Guy Carleton, and the role of the American soldiers themselves. This implies that most other factors mentioned by Smith and others could be removed; if Carlton and the American soldiers maintained their roles, Canada would still have rejected America’s rebellion.

First, Carleton. Guy Carleton was British officer in the War of Austrian Succession and the Seven Years’ War. After the Seven Years’ war, in 1768, Carleton was chosen to be the Governor of Canada (at that point, basically Quebec). His actions as Governor are the first of our reasons why Canada did not rebel with the Americans. Carleton did two things incredibly, shockingly well: he restricted the press, and he kept the elites on his side.

Press in Canada was very close to nonexistent. There was a single printing press, which was used to print a newspaper called the Quebec Gazette. Carleton made the sensible and safe choice to continue the policy of his predecessors, and use the Quebec Gazette to post all new laws affecting the colonists, any government job postings, and information about what ships were coming and going and when. This seems trivial, but what it meant was that the Quebec Gazette was financially dependant upon the government of Canada in general, and Carleton in particular. And Carleton made it clear that there should be no politics in the Quebec Gazette. It is quite odd to read Smith and other modern historians discuss this; they describe the Quebec Gazette as incredibly conservative, when all sides agree that its content was in every way apolitical. The implication is that by not being expressly rebellious, the paper was therefore anti-rebellion. It is left to the reader to look for modern parallels.

The Quebec Gazette stands in stark contrast to American newspapers at the time. Everyone knows that the Federalist Papers were originally published in newspapers, but that was true of many political documents, the angry ramblings of Samuel Adams, Alexander Hamilton’s anti-Catholic conspiracy theories, and insane imagined speeches by British politicians, calling for the blood of Americans, all to work the American people into a rebellious fervor. And it worked. Congress was able to raise armies because the American people believed (wrongly) that the British were baying for their blood, and this belief was fomented and in many ways created by the radical newspapers coming out of Boston and New York and elsewhere.

Essentially, by passively preventing the Quebec Gazette from becoming rebellious, Carleton stopped it from inciting the Canadian people.

“But,” I hear my more reactionary readers call out, “what does it matter what the people want? Every successful revolution is just a power struggle between two sets of elites. They often use ‘the people’ as pawns, but the people are not the drivers!” This is a sound criticism that comes from Pareto and de Jouvenal. The belief is that there are no successful “popular uprisings”, outside of elites weaponizing sections of “the people” against each other.

I do not know if Carleton intuited this concept, or if he just happened to stumble on the right answer, but he acted as if he knew it. Carleton chose exactly the correct groups of people to keep on his side, and the correct group to neglect. There were five groups in Canada that could possibly be considered “elites.”

The first of them, the British civil servants, were appointed directly by London, and as such had a lot to lose in any potential rebellion. Carleton did not have to worry about them. The second group was the British military. As Carleton was a military man by birth and occupation, it was only natural that he would give preferential treatment to them. This also kept his men loyal during the American invasion, even when Montreal fell and things looked grim.

The next two groups were the old French elite class, left over from before Canada was given to Britain in exchange for Guadeloupe. These two groups, the Catholic Priests and the Seigneurs, were the groups most closely connected to the vast French peasant population. Carleton ensured that both of these groups were taken care of in the governing document of Canada, The Quebec Act. The priests were once again allowed to tithe the Catholic population, and the Seigneurs were ensured that their property rights would be respected. As such, when the rebellion came to Canada, both the Priests and the Seigneurs remained loyal to Britain.

The final group of elites was the English-speaking merchants in Quebec City and Montreal. These were mostly immigrants from America. They brought with them their rebellious American ideas. It has been noted previously that Britain attempted to appease the American demands for unimpeded speech, and that such appeasement encouraged rebellion by spreading and normalizing their ideas. Carleton made no such appeasements to the English merchants, and although they attempted to help the Americans, they never saw much chance of success, and kept their rebellious thoughts mostly to themselves.

By keeping the first four groups of elites on his side, and by not appeasing the fifth group, Carleton ensured that any rebellion would at the very least have an uphill battle. However, if the Americans had acted perfectly, they may have still flipped one or two of the groups to their cause. However, the American invasion was poorly planned. There were not enough supplies, so the army started buying Canadian goods. But they did not not bring enough gold either, so they started using paper currency, which the Canadians did not want. When the Americans realized that their money was useless, they began to steal from and pillage the Canadians. This was the final straw, turning large numbers of the neutral peasants and the somewhat pro-American merchants against the rebellion.

The Americans were not removed completely from Canada until much later, when Carleton routed them after the invasion of Quebec, but their hopes of having Canada join them as the fourteenth colony were essentially quashed at that point. America would continue their attempts. Another letter, the invitation in the Articles, the offer to Britain, later the War of 1812, and many more attempts both official and surreptitious were tried. But Canada rejected each, and that rejection can be traced back to Guy Carleton’s wise decisions, and the American Army’s poor planning and ill-prepared state in the early stages of the uprising.

There are at least two lessons to be learned here. The first is that a “free” press is a powerful weapon. Whoever controls the press in many ways controls the fate of the nation. The fact that the vast majority of the press today is aligned against those with rightward values should be grave cause for concern. The second lesson is that Canada is not America. We do not have the violent rebellious beginning that America had. We rejected that beginning. We instead chose to gradually change into what we are today. Yes, what we are today, politically, is an embarrassment. But, unlike America, we did not burn our bridges. For Americans, there is no going back beyond the American Rebellion without another bloody rebellion. We, in the Great White North, may have exited through the door on the far left, and we may have closed the door behind us. But we did not throw away the key. Perhaps, one day, we will walk right back through that door.

Bill Marchant is a Canadian author living with his wife Rose in a houseboat on James Bay in Canada. He has a website, a book, and a Twitter account. If you would like to support him, leave a review on Amazon for his book.