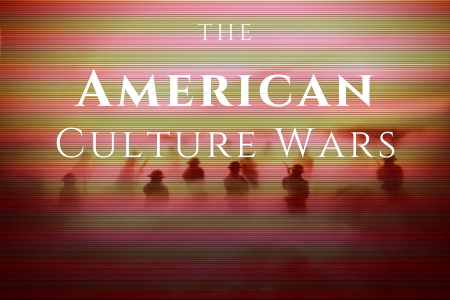 Since late 2015, American social and political life has seen a surge of newness. Like a springtime of cultural strife, the presidential election of 2016 was something of a Call to Arms for a new generation of young Conservatives and old Republicans alike. President Trump’s campaign was a supernova, an explosion of Right-wing politics, creating new stars, Conservative pundits, and Right-wing social media influencers. However, the American Right is not the only faction that has seen such a Renaissance. The Left-wing ideologies have not only gotten more widespread but exponentially more socially liberal. The makeup of the Democratic Party is so socially progressive that is has shifted the mainstream Overton window further Left. As Tucker Carlson so frequently speaks about, has our culture ever been so divided?

Culture War: its history in America

The term “Culture War” in the sphere of American politics was popularized by James Davison Hunter’s 1991 book “Culture War: The Struggle to Define America,” in which Hunter, who was a sociologist at the University of Virginia placed the start of the American Culture Wars in the 1960s. Hunter characterizes the Culture War as extreme polarization, with several not merely political (in the bureaucratic sense of the word) differences, but ones that are essential to the moral and ethical questions of our time. The critical part of Hunter’s analysis of the Culture War is that modern American society contains two warring tribes, the “Progressives” and the “Orthodox.” It is through the lens of these two tribes that we will look through the history of the American Culture War, starting during the dawn of Progressivism, the Roaring 20s.

This decade saw the most accelerated growth of the world’s economy in the recorded history of humanity. Along with this economic growth, it provided a fertile ground for Progressivism to be born. The 1920s saw the first real moral strife of America since the days of slavery. “Religious” Progressives destroyed the American industry by enacting Prohibition, ruining many cities that relied on the production of their brewery districts. Being from Cincinnati, I grew up and got to grasp the economic wreckage that was wrought onto the working class by Prohibition. Secular Progressives championed women’s suffrage, worker’s rights, immigration, and socialism, changing the nature of the American woman. Soon, “Vulture Capitalism” started to flourish. It grew so quickly that America’s economy became dependent not on the thrifty business practices of the Barons or the blood and sweat of the American worker, but the ability of banks to bail out the never-ending growth of the stock market. The insatiable appetite of capital had pushed aside tradition and cultural norms.

The negative and rampant growth the stock market experienced was not just a symptom of already loose morals of the country’s financial leaders but was a cause of the “gambling economy” that we see so deeply solidified in today’s society. The value of a man’s sweat could not be made public on the stock market. Family-owned companies had a generational investment in not only profits but the value of the product, the quality of their employee’s life, and their company’s reputation. This mattered not for the sake of profit but for the sake of their name. This changed with the injection of usury in the American economy, and reducing these companies to commodities, to be auctioned to the highest bidder. This reductionism essentially meant that he who bought the most pieces of paper (stocks) could claim to have the equivalent worth of generations of labor, blood, and dreams. In summation, the 1920s saw the enthronement of modern capitalism, social justice, and liberation of traditional modesty. This article will go on to explore the inter and WWII period.

From the late 20s into the 40s, we saw the first waves of pushback from the camps of “Orthodoxy” both in America and abroad. It is known that during the inter-war period, fascism soared in popularity on both continental Europe and in the British isles. What is less known (or perhaps forgotten by public textbooks) is that this was a reaction to the errors caused by the Progressive 20s that existed in America. The 1930s-1940s German response was towards the Weimar Republic degeneration, but that’s a story for another day. In America, the inter-war, during, and post-WWII intervals were defining for American Orthodoxy. Unlike in Europe, the United States does not have a history of “Orthodox” institutions; American history does not include the richness of nobility, autocracy, and monarchy that European history does. This created Reactionary energy that did not seek the return to tradition but instead of form an entirely new movement that was not revolutionary.

The opponent movements of the progressive periods are often characterized as populist without any distinction. Still, movements such as Huey Long’s “share your wealth” and the post-Huey Long assassination (God rest his soul) Union party were economically diverse but remained dogmatically united in their orientation. The Union party and the members/leaders it was composed of were supremely concerned with the common good. Populism has a connotation of being synonymous with Popular Sovereignty. Still, the focus of the Union party and its leadership was not an appeal to bring back the notion that the government ought to only do what the Polity ordains, but that no matter what, the welfare of Americans should always be put first. The policy should always be for the common good, and the law protects the American Polity.

American Conservativism is not defined by the tenants of popular sovereignty, limited government, laissez-faire economics, interventionist, or anti-interventionist foreign policy. American Conservativism has as its defining feature, a concern for the common good. As to paraphrase the late (may God rest his soul) Sir Roger Scruton, Conservativism is not the love of somewhere, not the love of the fictitious anywhere, but the love and devotion to home or Oikos. (The ancient Greek word Oikos refers to three related but distinct concepts: the family, the family’s property, and the house). American Conservatives should love America and want what is right and good for Americans. That is why despite the evident ideological and economic diversity amongst movements such as the Union party, all of its members can be labeled Orthodox/Conservative, with the focus of policy being the collective good of all Americans.

To properly look at the Culture War in America, one must juxtapose what both camps love. Progressives do not love Americans, and they do not love America; Progressives love themselves and worship themselves. Why? Because Progressive policies are never concerned about what is morally right and never ask themselves, “will this be good for the polity?”. This is true whether they are a Democrat seeking more socially liberal policies or a Republican seeking tax breaks for corporations that gladly employ cheap labor. The bottom line for the Progressive is freedom for oneself, and the bottom line for the Orthodox is the collective welfare of the American people. These two positions cannot be synthesized, despite the rantings of Libertarians. The conflict cannot be ended by compromise.

The War at Home

There is no doubt war is being waged within the United States. It is a war for the soul of the country. The nature of this war is very much a reflection of the two parties at war, and it is religious. The conflict going on today in America is cultic, and politics are treated like sports. Like any religious conflict, the good guys often do not win, and America is very much an example of the good guys not winning. There hasn’t been a real traditional conservative contender for the presidency since Pat Buchanan. Both parties have continued growing increasingly Progressive. Issues like abortion, gay marriage, and gender theory are entirely normalized. How many lives has Planned Parenthood destroyed? How many pornography addictions have destroyed marriages and children’s lives? This is not even mentioning the Opioid crisis and its destruction on rural America. As one considers all that Progressives have “progressed”, one starts to wonder, can Orthodoxy ever triumph?

After the election-year of 2016, the electoral map gave hope despite everything that has been discussed previously in this article. President Trump, as we all know, is not the perfect candidate, one may have even preferred Cruz or Rubio, both (relatively) Orthodox Republicans, but Trump was the outsider that was frantically wanted by the Polity. He is a familiar man, and his campaign of “America first” and “Make America Great Again” won the States over. It seemed that finally, there was a presidential candidate that did not campaign on some lofty ideal. Trump did not fight for the proverbial “anywhere” or the imaginary “somewhere,” Trump campaigned for America, and he won.

Since Trump’s election, we have had wins. Wins that include two Supreme Court justices, forty-four Circuit Court appointments, one hundred and twelve District Court appointments, Planned parenthood federally defunded, and several State legislatures have severely restricted abortion access. But, these feel almost weightless under the sheer onslaught of the Progressive war-machine. One asks again, can we win? What is the American Christian to do?

The Inevitable Defeat and Eventual Triumph

“I am a Christian, and indeed a Roman Catholic, so that I do not expect ‘history’ to be anything but a ‘long defeat’ – though it contains (and in a legend may contain more clearly and movingly) some samples or glimpses of final victory”

Ultimate victory is inevitable, it will happen, and we will win, we may just merely not be here to see it. The Progressive seeks to create heaven on Earth, and the traditionalist seeks to conserve what we can for the common good until God redeems creation. There is much to look forward as a Christian:

“And God shall wipe away all tears from their eyes: and death shall be no more, nor mourning, nor crying, nor sorrow shall be any more, for the former things are passed away.”

Hope in God, not in the temporal interpretation of the Masonic constitution, not in men, and not the Republican party.

Nicholas H. Vogt is a Catholic from Cincinnati, he is currently enrolled in a vocational program to be a Diesel technician. Vogt enjoys theology and politics immensely. His patron is St. Thomas Aquinas, and when possible attends Old St. Mary’s in OTR, Cincinnati.