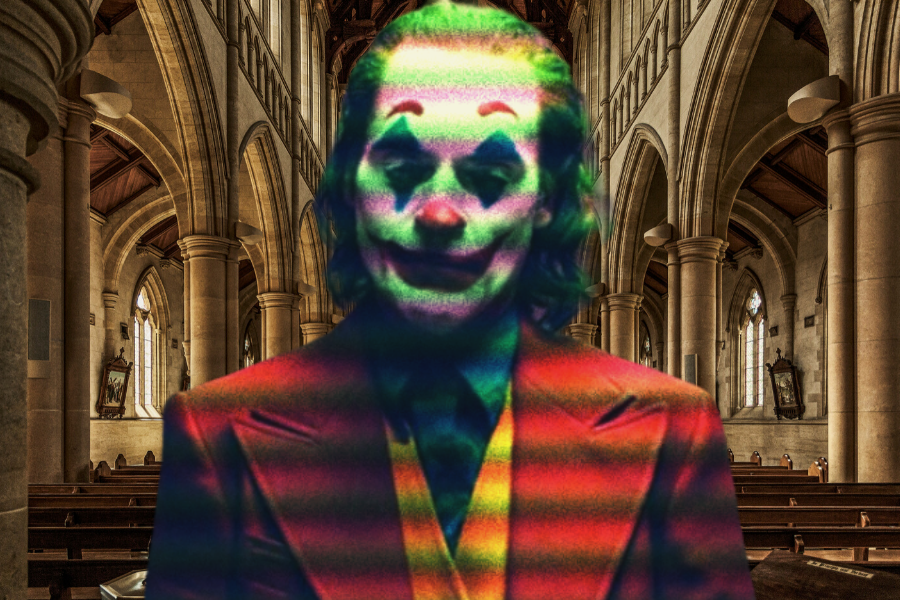 There is no doubt that Joker has become an unexpected hit: Sales easily surpassing $1 billion in the box office without foreign markets, an 89% audience score on Rotten Tomatoes and the press are in a tizzy over its themes that early before it’s release tried to press upon us its potential for movie-inspired violence (which never happened). All in all, a rather impactful (or at least distinctive) film.

But why? What’s the hook? What is it about Joker that has drawn the appreciation of audiences and the ire of the media it is supposedly a part of? Is it the smashing of political narratives as outlined by Jonathan Pageau? Is it a character study in realistic and plausible mental health issues as laid out by Dr. Andrea Letamendi? Or is it something else entirely? Different perspectives to varying worldviews, as both the Right & Left, saw it as a dissident political film against the “elites” of society. One viewing the struggle against an elite scorning the interests of the working class and the other the patriarchy. In my analysis, what has drawn so many into seeing this film (I’ve seen it three times myself) is a combination of things but primarily the story of Arthur Fleck who is an inversion of Christ—and by extension the Hero’s Journey mythos.

A side note: I will not be relaying the entire plot point by point as I don’t entirely deem it necessary. This is not to say parts of the movie aren’t important but as a matter of brevity.

Gotham, the city of God

Enter Roman Jerusalem: The City of God is awash in the blood of constant sacrifices (for the Jews felt the need to appeal to God for sins yet forgiven), dirty money greases the palms of lenders and exchangers, the sweat of many nations sticks to everyone. Smoke and stench cling to the air as trash is constantly burned in the pit known as Gehenna; it is at this point Jerusalem earned its apocalyptic title of “The Whore of Babylon”—a city everyone hates to be in, but everyone has come to has fallen from being the city of God to a city of hypocrisy.

Arthur Fleck, a man on the fringe of Gotham and broken by an unknown trauma, seeks therapy. Day after day he toils against the world, climbing against the grain and the culture (as a clown, he seeks to bring joy into a city weighed down by despair) further and further until the weight of said culture breaks him. As a clown, his inherent role is to turn things on their heads, to point out irony and truths while protected by the façade of paint and exaggerated movements and proportions. He is or will be, the physical embodiment of the Clown World meme. Arthur as a man lives with his mother Penny, sacrifices his well-being for her out of love, for she is seemingly ill. There is no father to speak of in the movie nor is one mentioned. He is a fool for hire of unfortunate lower intellect who is mistreated by co-workers, his boss, and citizens of Gotham. Jesus Christ lived on the fringe of Judea. As a Nazarene, He was often considered a fool, a rough tradesman, a redneck if you will (as all Nazarenes were) who toiled away as a carpenter to support his mother, Mary. His parentage, while not unknown, is equally unexpected—He is the only begotten Son of God. And though He was a carpenter by trade (as learned from His foster father St. Joseph) His intellect was shown to be divine in nature, as shown in the Gospels when He questioned and spoke to the elders within the Temple. And unlike Arthur, He is surrounded by cousins and tribesmen (John the Baptist, St. Jude, St. James, etc.)

The movie begins to insert this connection from the moment we are introduced to Penny. Above her bed and in other rooms of the apartment are at least two images of Madonna and Child and Penny tells him (or so he says in the delusion) that it’s Arthur’s mission to “spread joy and laughter to the world.” Christ’s mission was to save it and bring it into eternal joy. Penny herself is an inversion of the Blessed Virgin Mary. Unlike Mary and her Son, (whose conception and birth are considered immaculate according to Catholic teaching) Arthur came into this world through sin: Penny had an alleged affair with Thomas Wayne, a billionaire mogul, and industrialist.

I hold to this theory within the movie for four reasons: Alfred’s reaction to Arthur when he introduced himself (Alfred reacted as if he knew the whole story); Arthur and Bruce Wayne have similar hairstyles and similar colored clothing; Thomas Wayne comes across as sleazy enough to use his wealth to falsify documents and put someone away and possibly lobotomized (similar to a young woman claiming her child is her sibling); and lastly, in a blink-and-you’ll-miss-it moment, there is a note on the back of a photo of Penny that says “Nice smile—T.W” And it isn’t her handwriting.

Both men were baptized as they accepted their respective mantles: Christ baptized in water willingly. Arthur unwillingly in rage and blood. Both acts, in a sense, freed each man to act according to his will: Arthur, having found a sense of power and recognition is no longer bound by the worries of work, love or social constraints. By the end of his arc, he has faced judgment and placed judgment on the levers of society, executing Murr-ay Franklin, which sparked the chaos, disorder, and destruction. Gotham is flipped on its head. Arthur’s descent into madness and Hell leads to a resurrection at the hands of his adoring clowns, his body laid upon the wreckage of the police cruiser he was in a La Pieta position. He has become the Clown Prince of Crime, friend to the poor and the ire of order.

Christ’s death came at the end of a crushing, humiliating and apparent defeat. He who was promised hung bloody and limp upon two posts of wood. Empty, drained, spat upon and deposed. No man loved Him and nearly all who followed Him abandoned Him. Those He was meant to save poured their hate into Him. He who came to save and change the world was crushed by it. The world won. The mob won. Order was flipped on its head.  There was no triumph there.

Except, Order returned. The Logos—the Word and Order of things personified—righted Himself. Hate, derision, and pride became love, forgiveness, and humility. Slavery became freedom, old became new. The discarded became the foundation. These things have remained with us for 2,019 years. The mob of Jerusalem lost.

The mob of Gotham poured their anger, despair, and love into a mask because of the actions of its wearer. They loved Joker, not Arthur. Arthur became the opposite of a scapegoat—he became the exemplar of Gotham’s chaos. And for that, they cheered him and his mask. The pressure valve broke off, and for as long as Arthur lives, Order will remain flipped on its head.

So, what can we learn from this? For one, this movie has struck a chord with millions, that much is obvious. Why is this though? A big part of it, I would argue, is that audiences have gorged themselves on The Hero’s Journey for ten years’ running in the MCU. We saw this tired mold starting to crack with the villain Thanos in Infinity War. The villain won. It was his story and it was oddly refreshing. The mold was finally smashed to bits with Arthur Fleck. A billion, non-foreign market dollars later and the buzz still continues.

But was it just novelty?

How many of us have experienced personal pain, tragedy, trauma or neglect? Felt unwanted? Not a week goes by where I often wonder if I were an anomaly that shouldn’t exist. I was born a month premature with parents who married due to the pregnancy, narrowly escaped a medical waste bin were it not for the love of my mother. A little boy who saw his parents divorced before he was five, not fully realizing the damage it caused until today. We were poor, angry and tired. I was a constant target due to my size and supposed happy demeanor. 1990s Dallas was like 1980s Gotham, clawing its way out of the oil bust of the previous decade.

Joker spoke to the chaos within me and the chaos within most of us. It is the chaos of sorrow and rage within any of us. The world is a crushing, brutal and unforgiving place. Anyone of us could’ve succumbed to the same pressures of Arthur Fleck, seeking a misbegotten love in the form of public and frenetic adulation. As a reflection and inversion of Christ, Arthur and this movie are indicative of the chaos that awaits us should we continue to flip things on their heads without resetting them to order. It’s either “everything must go” or “it is accomplished”.

The world remains in current times very chaotic. Order has been flipped time and time again, the intervals between inversions and flipping coming closer and closer together. Any single one of us has the potential to become the next Arthur Fleck if we do not embrace the true love, faith, and sacrifice that is required for order and for God.

Written by David Van Vranken. David works as a QA/QC Inspector for Vaughn Construction out of Houston, Texas. He also serves as a Company Commander in the Army Reserves. David has previously published at Entropy Mag and Every Day Fiction. Enjoy the article and want to buy David a coffee? Click here. ☕