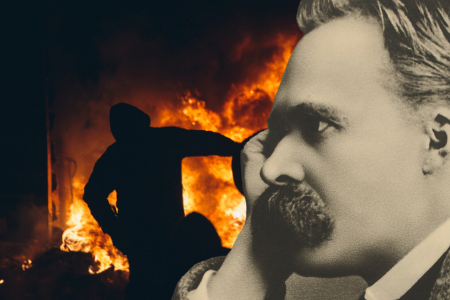 Most Americans by now have watched, with dreadful horror, the hideous video of George Floyd slowly expiring beneath the knee of Minneapolis Police Officer Derek Chauvin.  That looming sense of dread was then promptly replicated by eruptive destruction, toppling of statues, the establishment of bizarre little sovereign “autonomous zones” within blue cities, and other violent acts of faceless mobs extending Floyd’s injustice to everyone it meets.  With righteous Luciferian rage, young people from all walks of life—robbed of the proper understanding of justice— have extended its antithesis outward in a centrifugal spiral of mayhem. We are witnessing, it seems reasonable to suggest, the full realization of national descent into moral decay.

That the death of Floyd was unjust has hardly been debated despite the polarizing nature of today’s public square.  Whether conservative, progressive, or some shade in between, the general response has been but various shades of indignation.  Rather the fault line in the affair has been revealed through interpreting the mob. And it is both predictable and depressing to see defense and reproof pile up for every criminal behavior, while neighborhoods burn, caught on camera.  This is our modern inheritance, the fragmentation of morality into a tribal identity and the Nietzschean power struggles to consume our cities.

Entire volumes have been written to grapple with the origins of this breakdown, but an essay length summary could do worse than casting the Protestant Reformation and Enlightenment as the dual events that ensured collapse.  In both cases, the individual was successfully pitted against his institutions that provided order and narrative. As we are witnessing, the romantic myth of the almighty individual—with his perfect rationality and coherent spectrum of desire—that these revolutions revolved upon is a wistfully incomplete creation.  Such a lacking creature, it seems fair to suggest, will gladly fill the vacuum of institutional order and narrative with an inverted collective will.

The George Floyd inspired rioting is undoubtedly a nasty response to injustice, but of a fitting sort for the deracinated individual cast into social atomization and top-down moral corruption.  In his critically acclaimed book, After Virtue, the philosopher Alasdair MacIntyre explains that these ever-expanding moral pathologies can be traced directly back to their origins in the Enlightenment.  The chief philosophical aim of that era, MacIntyre specifically targets Kant—among others—attempted to justify morality in a scientific manner, and thus unattached it from time and space.  According to MacIntyre, this project was doomed to failure because of the relative way that societies adapt their morals, that various cultures have different mechanisms for justifying their morality, and the only remedy to this problem is anchoring morality itself to a tradition that can direct man from his lower nature to his higher of “man-as-he-happens-to-be and man-as-he-could-be-if-he-realized-his-essential-nature.”

In such a way we have a burdensome decision, and it is what MacIntyre explains has defined post-enlightenment-modern-society.  One option is a philosophy of the virtues—most notably put forth by Aristotle and then further expanded upon by Thomas Aquinas—where action, habit, the demands of the community, and the abstractions of philosophy all come together in an orchestra to help a man become as he ought.  The alternative, that we can see on a primal scale in these riots, is morality more closely related to the late nineteenth-century German philosopher Friedrich Nietzsche.  He plays the role of both hero and villain in MacIntyre’s narrative.  On the one hand, Nietzsche correctly demonstrates why enlightenment era philosophy, severed from lived experience and any final ends, had to spiral into absurdity.  On the other hand, he lays out an alternative morality that MacIntyre believes sees playing out in the post-enlightenment world—one rooted in the purest expression of power.

To Nietzsche’s mind, all morality has been, as written in After Virtue, “the making of would-be objective moral judgments as the mask worn by the will-to-power of those too weak and slavish to assert themselves with archaic and aristocratic grandeur.”  Nietzsche believed it was simply time to remove the mask and assert power for its own sake.  As they say, to the victor go the spoils—in this case, the spoils are the sovereignty to determine whose morality clothes the public square.  This sovereign has the unilateral authority to define or redefine morality itself, and he is the man at the center of Nietzsche’s apocalyptic fiction Thus Spoke Zarathustra.  The Superman, per Nietzsche’s definition, transcends good and evil and offers a radical vision of man as he could be.  In the end, modernity is stuck choosing between Aristotle and Nietzsche, for these two offer modernity clear images of humanity at its best.  Nietzsche’s vision, unlike Aristotle’s, should be understood as rooted in pure abstraction.

Both by default and design, we are living in a thoroughly Nietzschean world where power alone determines whose good defines public life.  This is precisely why protest is treated with such importance in modern society, if it was about getting to the truth of the matter then dialogue and debate would be adequate, but public morality unattached to the virtues can become nothing other than a struggle of wills. MacIntyre unmasks this underlying problem of protest culture by explaining how the modern notion of rights enters the scene as an individualistic replacement for the universal notion of justice.  By framing one’s rights in such a manner we find they will inevitably come into conflict with another’s utility—that is the fitness for purpose or worth to some end.  This dynamic can be observed in the infamous Supreme Court case, brought forth by the Little Sisters of the Poor, where they were conscripted by the Obama administration to provide birth control to their employees. In that scenario, the utility of an employee’s access to cheap birth control pits itself against the nuns’ rights to religious freedom.   The absurdity of it all is that any just resolution is nearly impossible because we are all at the mercy of sentiment by the duly elected arbiters of rights—be that of executive, judicial, or legislative government—but in every sense then justice as an end has been overthrown by the private preferences of elected authority.

This is precisely why protest culture becomes a necessity in modern society.  Only the will to power can work as a resolution to this sort of political conflict. Morality is central to how we order ourselves toward the good.  It offers a shared language and narrative for society, but when it is seated on individual conscience then any number of rational claims to a private good is pitted against other competing rational claims.  Hence the morality project taken on by the enlightenment, fully realized in the will to power, has the same dissolving effect on society as “Sola Scriptura” had on Christendom.  We have fully given way to the Nietzschean model and remade civilization into an all-out struggle between warring tribes, and as Christian society continues to dissolve, it stands to reason that, the struggle of will becomes invariably nastier and more reflective of our barbarian society.  Lacking a proper language of justice ordered towards the highest good, or what philosophers once called the common good, modern man resolves conflict the old-fashioned way—through brute force.  In this sense, when barbarians are ruled by barbarians, we can expect that protest and rioting are an inevitability.  The only peaceful resolution must begin with a return to Aristotelian virtues and recover the concept of justice in its most classical sense.

Otherwise, as society is further disenchanted by overweening acts of injustice from above, and counteracted by the rivaling injustice of the mob—we would do well to prepare for much more of the same.

Michael Morris is a husband and father from Denton, Texas. His writing has appeared in The Federalist, Crisis Magazine, The Everyman, and Ethika Politika. He can be followed on Twitter @laffyjaphy